You are here > Home > Things to Do > Hurst Castle 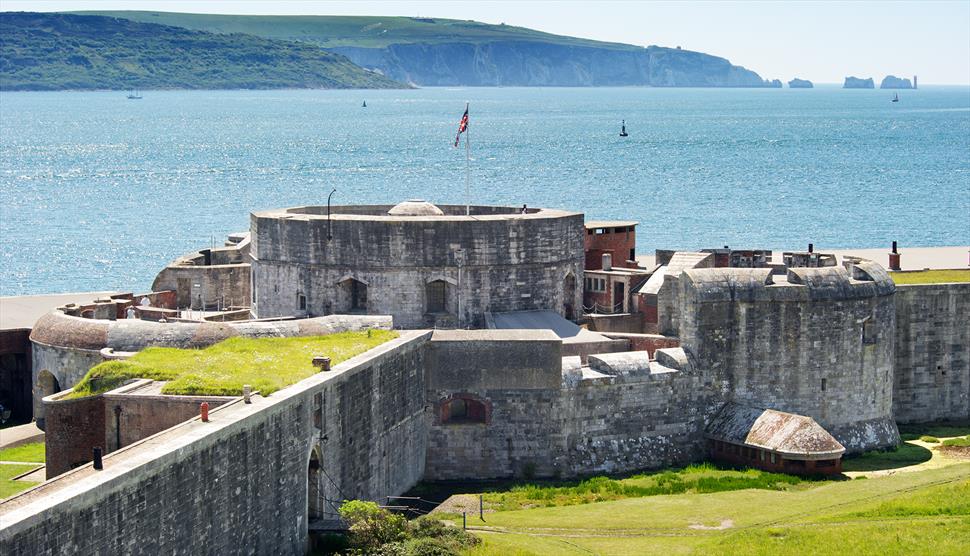 Henry VIII’s Tudor castle will be opening to visitors from 29th May to explore daily.  The Victorian east and west wings remain closed while English Heritage’s conservation and repair work is ongoing, with the entrance fee reduced accordingly.

In February 2021, a section of wall on the 19th-century east wing of the castle collapsed, after the sea exposed and undercut its foundations. English Heritage is now coordinating a major project to protect and bring stability to this part of the castle.

Whilst English Heritage’s conservation and repair work is ongoing, we look forward to welcoming you back to the Tudor castle built by Henry VIII. A visit to Hurst Castle is one of the best days out in the New Forest with plenty of open space for children to explore and fantastic views of the Isle of Wight. It is a must for visitors to this area.

Come and discover this artillery fortress, built by Henry VIII, at the seaward end of a coastal spit offering one of the best views in England. Commanding the entrance to the Solent, its strategic location has developed the castle into a powerful fortress, steeped in centuries of military history.

From its beginnings in 1544, as one of Henry VIII's chain of artillery defences, Hurst Castle, unusually for a Tudor castle, remained in military use until 1956, playing an active role through both world wars. On occasion it was also used as a prison, most famously in the imprisonment of Charles I in the 17th century, during the Civil War. Hurst Castle defended England from invasion threats in the 19th and 20th centuries.

With spectacular views of the Solent and the Isle of the Wight from the top of the Tudor Keep and plenty of open spaces for children to explore, it's a great day out for the whole family. The 'Hurst Mess' offers hot and cold drinks, homemade food and cakes. Dogs on leads are very welcome too.

Access to Hurst Castle, is a leisurely ferry ride from Keyhaven (charges apply) or a 2-mile walk along Hurst Spit (please note this is a shingle spit).

· Step inside the heart of Hurst Castle to its Tudor fort, which retains much of its 16th-century appearance.

· Follow the steps to the first floor of the Tudor keep, where it was probably here that Charles I was kept prisoner in 1648.

· Enjoy the spectacular views from the roof of the Tudor keep across the Needles Passage to the Isle of Wight.

· Take a visit to the basement of the Tudor keep, used for storage of food, fuel, weapons and gunpowder.

From A337 take the turning for Milford on Sea, Hurst Castle will be sign posted in this direction.  Follow the road into Milford on Sea village. Turn left into the village centre and turn left again at the staggered crossroads. Follow this road to the end and you will arrive at Keyhaven.

There is no road access along Hurst spit so it is not possible to directly reach Hurst Castle by car.  Parking is available at the pay-and-display car park at Keyhaven (postcode SO41 0TP).  From there either use the ferry to the castle (see Ferry details below) or walk approximately 2 miles along the shingle spit from Milford on Sea (sturdy footwear required).

There is an alternative pay-and-display car park at Milford on Sea seafront (postcode SO41 0PY) where it is possible to walk to Hurst spit or Keyhaven for the ferry.

Ferry
Access to Hurst Castle is a leisurely ferry ride from Keyhaven (charges apply).  The ferry operates daily from 1st April – 31st October, approximately every 20 minutes.  For more information please visit How to get to Hurst Castle | Hurst Castle Ferry or Walking

The nearest railway station is New Milton, which is 4 miles away. To use the Bus, the More X1 to Milford on Sea is within 2 1⁄2 miles , or 1 mile to ferry.

Ferry
Access to Hurst Castle is a leisurely ferry ride from Keyhaven (charges apply).  The ferry operates daily from 1st April – 31st October, approximately every 20 minutes.  For more information please visit: How to get to Hurst Castle | Hurst Castle Ferry or Walking