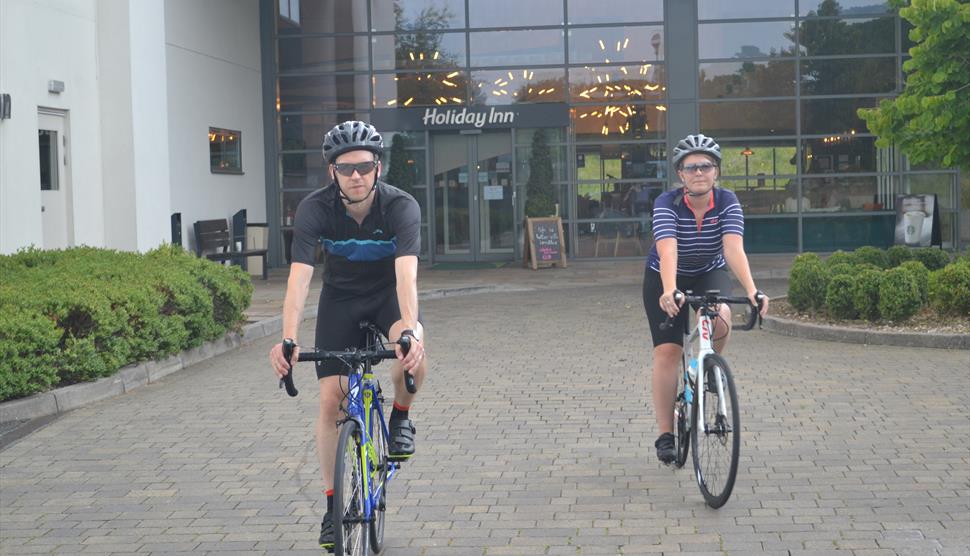 King Alfred Statue
The Broadway
Winchester
Hampshire
SO23 9BE

The Itchen Valley cycle route stretches 19-miles through great Hampshire countryside and the home of watercress.  For hundreds of years watercress has been grown in the Itchen Valley.  The Georgian market town of Alresford even has a heritage train line named after the produce, Watercress Line Mid-Hants Railway.  Each summer the town hosts the Watercress Festival, a food festival with watercress eating competition.

The route starts from the cycle friendly Holiday Inn Winchester, on the out skirts of the city, a great base for cycling break.

Alternatively, if you are starting from the city centre, begin the ride from the imposing King Alfred the Great statue at the lower end of the High Street.  A round trip starting from the statue will increase the route by five miles.  From the statue, head east along Bridge Street and then take the 2nd exit at the roundabout on to Chesil Street.  You will pass The Chesil Rectory an award winning restaurant occupying a 600 year old Grade II listed medieval house.  Then take the 2nd left onto East Hill - note The Black Rat, another fine dining restaurant.  Take the 1st left onto Quarry Road, ride to the end of the road until your reach a T-junction, then turn right. Cycle for 1.5 miles and you will arrive at the Holiday Inn Winchester, where the route begins.

Highlights and points of interest of the Itchen Valley cycle route:

Easton
The quaint village is scattered with thatched cottages with pretty gardens filled with seasonal flowers. Here you will find the Cricketers Inn pub.

Avington Park
A little further on the ride you will find Avington Park will be perfectly framed by woodland as you cross a cattlegrid and enter the estate.  This stunning privately owned stately home and its surroundings provide one of Hampshire’s most famous vistas.  Take in the views of the house, lake and watch out for the highland cows too!

Alresford
As you enter the outskirts of Alresford you will ride alongside the watercress meadows and see how the superfood is grown.  As you descend towards the high street you will pass under a railway bridge, keep a look out for the Watercress Line, which runs between Alresford and Alton.  Alresford is the halfway point on the route and you are spoilt with great places to eat and drink including cafés such as the Tiffin Tearooms or Caracoli. If you prefer heading to the pub, choose from The Bell Inn, The Horse and Groom or The Globe.

Itchen Abbas
From the highest point of the route descend towards Itchen Abbas and rewarded yourself with a pint in the beer garden which backs onto the River Itchen.  Then retrace your steps through Avington and back to your original start point.